Back Up Comes Up Trumps - Lye Town vs. Boldmere St Michaels

This weekend I had intended to take in Halesowen in the FA Cup but from the start, this plan had problems. First of all the match was moved to a half twelve kick off but I could still make it in time with my advance train ticket. However this was not actually possible if all the lines were blocked at Coventry. To make use of my ticket, I had to travel to Snow Hill from Marylebone and from there I went on to my back up at Lye. I'd seen a lot of pictures of The Sports Ground and it looked even better in the flesh. In The Midlands Premier League this afternoon they were hosting Boldmere St Michaels who were yet to win this season. Lye had only won twice themselves so was a big game for both sides.

Boldmere have the first chance as they have a shot well tipped over following a pull back from the winger. It is however Lye who get the opener when the Boldmere player turns a cross into his own net. Boldmere aren't downhearted and they get the equaliser from a long throw that the home defence fail to deal with. The last chance of the half falls to Boldmere and they are unlucky to see a shot hit the post after the player is found with a great past.

Lye almost score a fantastic goal at the start of the second half as an audacious lob hits the post. Boldmere go ahead for the first time when the Lye keeper blocks a shot but he cannot stop the rebound being smashed home. The lead doesn't last too long due to the Boldmere keeper letting a weak through his grasp. Lye now go for the winner and it takes a great block on the line to stop a certain goal. The visitors claim their first of the season as a result of a great finish created by a looping ball forward.

As I said in the first paragraph, the best way to get to Lye is to take a train to Snow Hill from Marylebone and changing there for Lye and this all takes just over two and a half hours. A very short walk from the station is the tap room of The Sadler's Brewery where they offer a wide choice of their ales. About five minutes away is The Shovel and among the extensive ale choice are a couple of tasty collaborations. The ground is just a couple of minutes from the station and the clubhouse had the usual selection of drinks. The Sports Ground is a real cracker and is a must visit for anyone who loves football grounds. 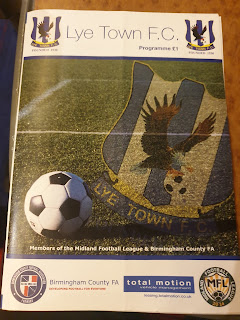