Counts As A New Ground Right?! - K Sports vs. Rusthall

With another Christmas event on Saturday evening, I needed another game close to London. I had eyed up Roffey with the backup of Broadbridge Heath but the weather late in the week made me lose my nerve and I went for the 3G option at K Sports - of course both games in Horsham went ahead with lots of goals. As the headline suggests, I have visited Cobdown before when they were APM Contrast and played in front of the fantastic stand but as the pitch has completely moved this counts as a new ground in my opinion. Their opponents today were Rusthall and if you haven't visited Jockey Farm yet it really is a cracking ground. Both sides were towards the bottom of the table with K Sports being five places and sixteen points ahead of Rusthall.

Rusthall get the ball across goal early on but no one can get the killer touch. There is then controversy at the other end as the linesman flags for a penalty for K Sports but the referee disagrees and play goes on. Rusthall then gift the home side the opening goal when they give the ball away in their own half and the attacker is played in and he slots home for one nil. Things soon get worse for the visitors as they are reduced to ten men as a result of a dangerous tackle. Just before half time a quick free kick catches K Sports out and the keeper has to tip the eventual effort over the bar.

The second half is a bit of a non event but at least it was dry. K Sports get the second goal as the forward is allowed to attack a corner and he forces it from close range. The closest we come to a third goal is a K Sports shot from distance that is tipped just over the bar.

It takes less than an hour to get to Aylesford from London. You first take the high speed service from St Pancras to Strood and change there for the train down to Aylesford. Last time I visited Cobdown I went in to Aylesford itself but this time I opted to go the other way to Larkfield where there were a couple of pubs. The first one, The Monk's Head, was good the early kick off while The Wealden Hall is more of gastropub and had a better selection of beers. The clubhouse at the ground had a wider selection of beers including one ale on hand pull that went down very well. The clubhouse also had Sky Sports and served as the bar for the wider sports club. 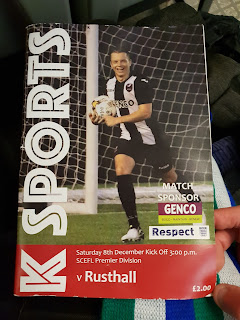 Posted by Colliers_Wood_Iron at Sunday, December 09, 2018